I've been holding my thoughts about ActRaiser 2 in for quite a while; peoples' experience with it vary wildly, and this creates more pressure for me to really nail what is it about the game that I and a few others find so endearing.

It certainly does not make a great first impression. The attract mode - featuring the controllable character moving sluggishly, killing a few minor demons, and finishing off a larger enemy in a single hit - is, frankly, quite lifeless. Despite that, here some will already notice the unusual yet pleasant art style: the enemy sprites are large and detailed, and the player character boasts a lot of animation frames in his attacks and move cycles.

As you dive into the game, you're greeted by an angel who hastily tells you that a group of ancient demons has reawakened, that you have to defeat them, and explains how to navigate the map, which serves as a level select screen - here most players will end up selecting Industen, which is a location you can clearly see from the starting position on the map, and I believe it is natural to assume that the developers meant for it to be the first level, even though others are already available at this point.

And after this bare-bones introduction, the game pretty much falls apart: the player is dropped into a side-scrolling level with nearly no features other than a few platforms in the middle of the screen and enemies coming, quite literally, from every direction. Your sword is short and its neutral attack doesn't hit targets on the ground; every enemy can take multiple hits before dying - which makes it nearly impossible to kill something without getting hit yourself; many players' attempts to jump to safety onto a platform will end in miserably sliding off of it right into even more enemies, and those who manage to properly land(which requires no less than 3 jump button presses for a high platform) are likely to be knocked off by a passing dragonfly enemy anyway. Whoever manages to make it past this first part will have to deal with a mid stage miniboss whose attacks are seemingly impossible to dodge, and right after that with a platforming section situated above a insta-kill swamp that expects you to do two long leaps of faith without seeing the platforms you have to land on, and those aren't even the hardest jumps. Every failure takes you back to the start of the stage, and the weird repetitive music quickly ramps up the frustration.

And this is just the easiest stage.
No wonder, then, that many players who attempt to play this game simply quit at the first stage, or after only having beaten one or two of them: ActRaiser 2 makes absolutely no effort to teach the player how to actually play, and that is its greatest failure. If there ever was an action game that could legitimately be improved with text tutorials, it's this one - although an introduction stage would have obviously done the job as well.

This weakness, combined with poor early sales due to not being ActRaiser 1 [*], which at the time did have a following, meant that AR2 was headed for fading out of the hivemind's awareness; which, I believe, is a great shame, because there are some qualities to this game that make it unique for its time, and worthy of a modern re-examination.

Because those who keep playing find out that after the bumpy start the game maintains a reasonably stable difficulty curve: no level, with the exception of one really devilish screen, ever feels like a greater wall than the one before it, even though the levels' complexity and length steadily increases, and the access to 2-3 levels at any time for the majority of the game provides a decent fallback in case the player is stuck.

And as you keep playing this bizarre He-Man spinoff, you begin to notice all the points where ActRaiser 2 really shines: the variety of the location designs is solid; the bosses and many of the regular enemies have pretty good sprites; the start screen difficulty selection provides a good way to scale the game to your own abilities; the system of infinite continues is actually quite fair; but most importantly, if you were paying attention, you start getting the combat.

You see, ActRaiser 2 is not your generic 90s platformer. First and foremost, it is an action title, and a very unusual one at that. The main concern of gameplay is not simply moving from one side of the screen to the next, or acquiring power-ups(as there simply are none), but mastering the controls to become capable of smoothly chaining the jumps, glides, dives, and the variety of attacks at the Master's disposal.
There are many quirks to the combat system that reveal its nature: uniquely for a game of its time, there are multiple ways to keep moving forward while constantly dealing damage to the enemies, which coincidentally also makes them unable to deal damage back to you. Nearly all of your movement and attack animations have no lag frames whatsoever, and can be cancelled out of at any time. Your character's hitbox is surprisingly small, which makes skillfully navigating tight spaces between enemies possible. A few of your available attacks even make you completely immune to damage for short periods of time, further increasing your ability to just go crazy on the battlefield, killing demons without taking any damage back.
It's not all roses, now - some stages are, simply put, bad, and the magic system is honestly a failed design; there's 7 spells available to you, but only 2 are actually of any reasonable use, as the other ones are more likely to end up working against you, which contributes to the difficulty of figuring out the right way to play the game.

Whether intended by the developers or simply a result of a lack of polish, thanks to these subtleties of the combat system, combined with the tight controls and a decently challenging enemy awaiting you in the middle and at the end of every stage, defeating them one by one really provides a great deal of satisfaction. There are a few bosses that are less than stellar, but overall the experience is positive, and it all gets topped off by the amazing two final stages - Tower of Souls, and Death Heim, which respectively contain a miniboss-rush, and a boss-rush. They're both a great challenge(although ToS arguably more so, as it makes you go through a long and deadly platforming section every time you want to attempt the miniboss-rush) and create a wonderful buildup to the final boss, Tanzra - a massive demon with so many health points that the game just hides your entire UI away because it can no longer fit the health bar on the screen(although this effect fits the scene quite nicely). To be fair, that boss is a bit of a disappointment, because you can cheese him slightly, but even then the fight is quite exciting due to the very real risk of dying at any time. 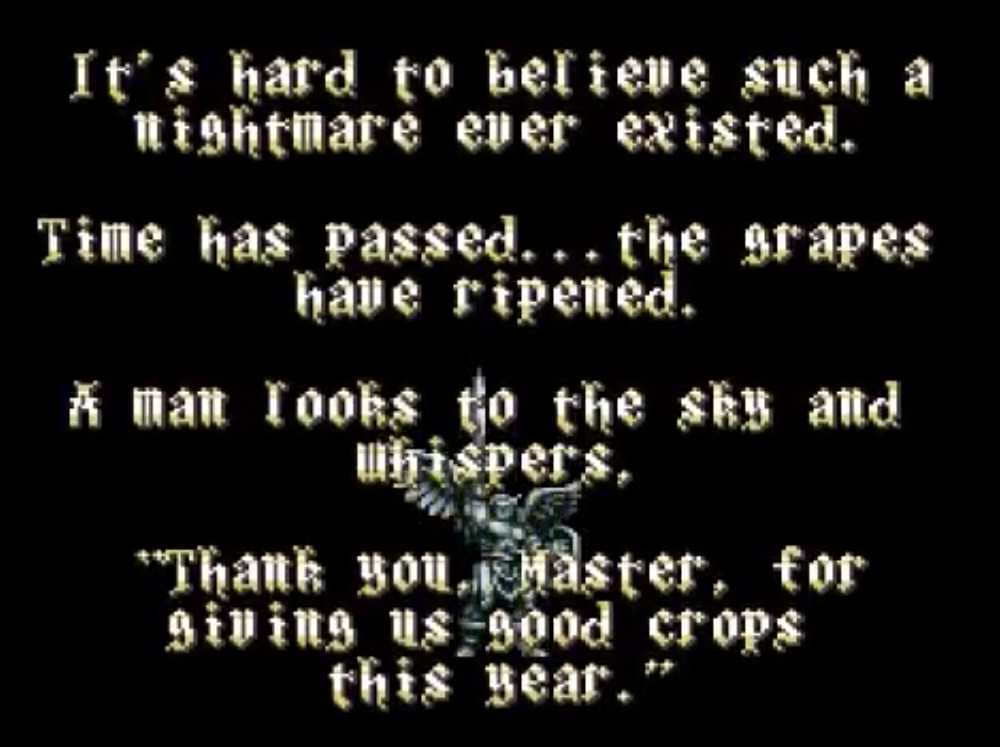 There, when you finally defeat Tanzra, comes the greatest reward: ActRaiser 2 is, simply put, incredibly satisfying to beat. The screen fades out, short but sweet and memorable epilogue text rolls by, and that's it, you've finally done it. The Master's statue crumbles away, into dust.

And therein lies the essence of what I find really fascinating about ActRaiser 2. Nearly all modern games tend to make a trade-off between the depth of their basic mechanics, and the challenge of moment-to-moment gameplay; they either give a great deal to freedom to the player but end up much too easy to cheese through or simply frustrating depending on the difficulty setting, or they severely limit the player in his capabilities along with lowering the overall pace, and turn the challenge of the game into observing the environment or memorising attack patterns.
I feel that AR2, however, managed to strike an exceptional balance in this aspect. I absolutely will not claim it's better than all modern action titles, as it has its frustrating moments and a slew of other problems, but I do believe that games could still learn something from the way this mostly forgotten gem is proudly willing to put the player's skills to test.

And if someone wants to give ActRaiser 2 a try, go for it. It's worth it. 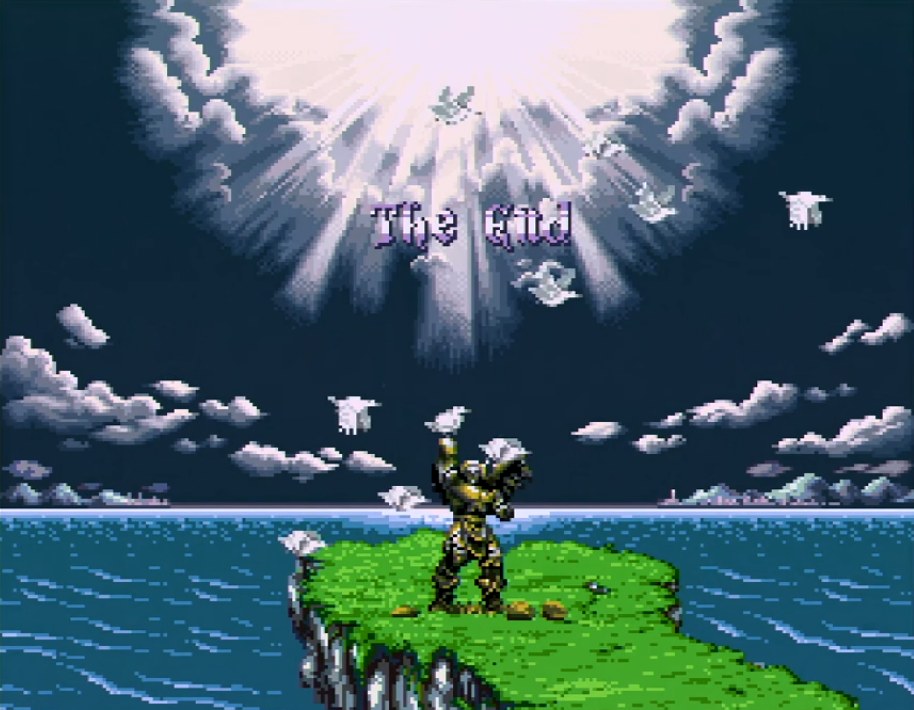 [*]: The first ActRaiser had a very different design philosophy in its action stages, and featured a city building phase. AR2 was a huge step away from its predecessor. ↩.