Myst is a game that was truly groundbreaking for the medium. While its setup of a mute player-insert protagonist walking around quiet environments and solving puzzles is something that's become popular in recent years, Myst intertwined the concepts of exploration, mystery, and narrative back in 1993 in a way that hadn't been seen before. Its sequel Riven carried on that legacy of innovation, building on the concept of exploration while moving away from the a deliberately puzzle-oriented structure in an attempt to leverage the unique strengths of first-person adventuring. Nineteen years after the release of Myst and Riven, with their impact on gaming impossible to calculate, The Witness was released in an attempt to recapture what made those games so intriguing in the first place while stripping away the flaws a more distant perspective could reveal. However, even with each game sharing the core principles of first-person explorative puzzle solving, each one uniquely mixes these elements to leverage the strengths of the genre. 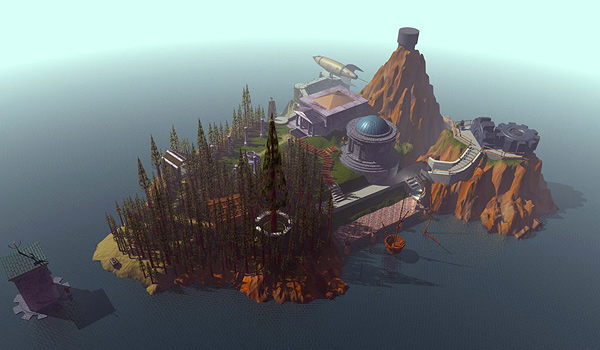 Myst's focus is on the titular island of Myst, a very small area filled with indecipherable puzzles and a small library which serves as a focal point. After exploring this library, you learn that these puzzles aren't as indecipherable as they appeared at first glance, with most of the required information accessible somewhere in the building. There's still solving to do but it's noticably separated from the exploration itself, with exploration used to establish all your tools and necessary information but with solving as a separate process. As an example, at one point you need to find the code to open a safe, but it contains a necessary problem solving tool rather than the key to a new area. Once you get that tool from the safe, no further exploration is required, and all the logical elements you need to solve it are at hand. Even when the setup isn't this clear cut, the premise of using exploration to establish the tools for direct puzzle solving is Myst's core structure. It's a straight forward way to join the two concepts, but it's not without downsides. Most puzzles don't have requirements as explicit as a safe combination, and a small detail from one level might be required in an entirely different one later on. It boils down to a lack of direction, where the player is left to figure out how to correctly connect the puzzles to the environment. While most puzzles in Myst don't cause too much trouble in this respect, some definitely land on the side of esoteric, and it only takes one brick wall to bring you to a dead stop. Even after you get past a barrier like this, it can shift the mood from exploration to careful cataloguing, a problem which may have been solved if the puzzles and environments didn't have such an obvious layer between each other. 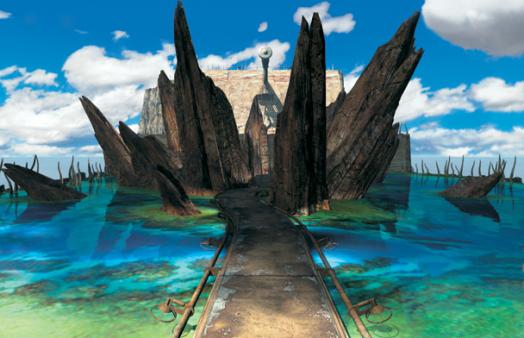 Riven is the direct response to this idea that separation between puzzles and environment is contrary to the goals of an adventure game. You may be doing the same first person exploration in Riven, but this time there's less than five puzzles to contend with, and discovery takes the main focus. Instead of combinations for safes, you're looking for meaning in symbols; instead of going to different worlds with their own puzzle themes, you're freely traveling to islands in an archipelago with their own pertinent details. Riven is not trying to test learning, it's trying to test observation and understanding, which uniquely fits its gameplay presentation. Such a slow burning experience can be incredibly rewarding at the end, but the main flaw is how unrewarding it can be on a second to second basis. Myst's puzzles may have felt tacked on, but they had the advantage of telling players they were on the right track. Riven doesn't have any such mechanism, and if a player doesn't immediately recognize the significance of a single environmental detail, it could mean hours of backtracking and searching. This isn't entirely a bad thing, as players usually aren't given this amount of intellectual trust, and most games don't have enough trust in their own design to not just slap markers on everything, but the amount of things to keep track of combined with an inconsistent camera means that most people will have to look something up eventually. Myst and Riven are both famous games for people to say "I loved that game as a kid, but I could never beat it, back then you couldn't just pull up the internet..." and so on. While Riven still provides an amazing experience, it needs what Myst needed: a followup which can take advantage of new technology and learn from design mistakes. 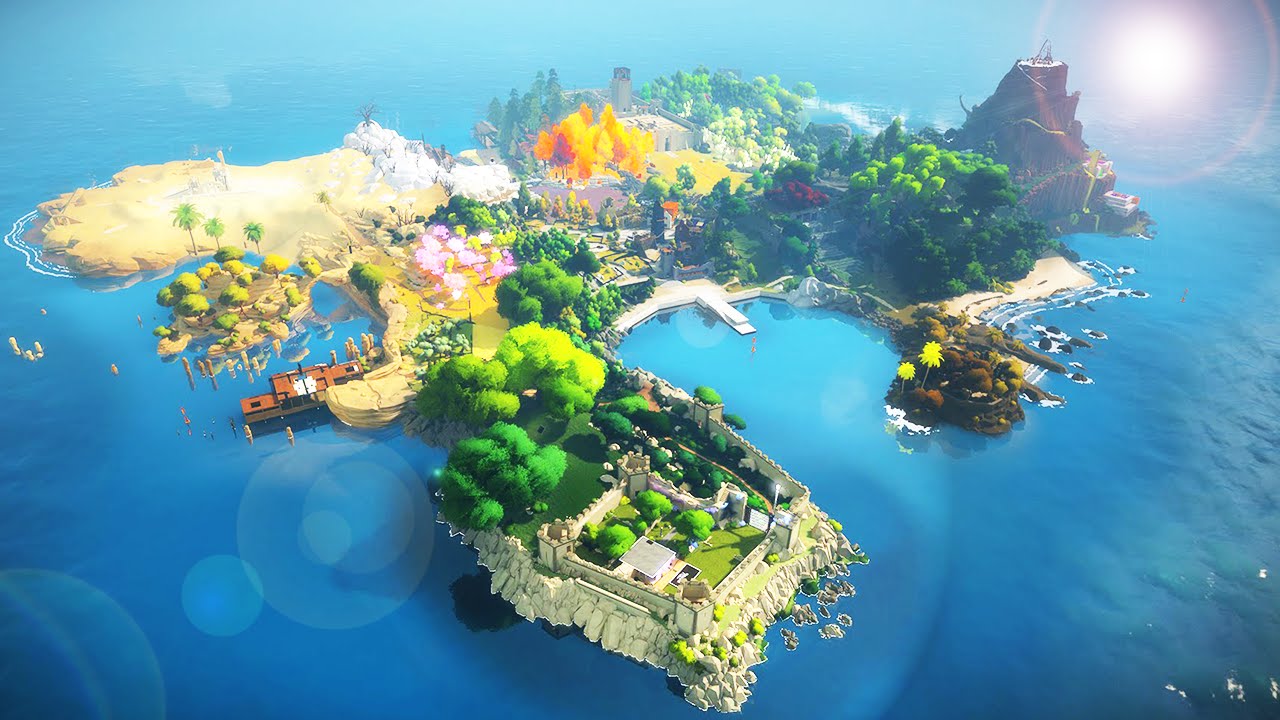 The Witness seems to be the modern descendent of Myst and Riven, more so than any other modern first person exploration games like Amnesia and Soma. While The Witness wasn't made by the same people or directly related to Myst, its lead designer has spoken about the influence these games had on the Witness, and comparisons come naturally with a nearly identical gameplay premise. The most notable difference is yet again a shift in the style of puzzles to solve. Myst set them next to the environment, Riven made them the environment itself, and the Witness sets them outside the environment almost entirely. Riven and The Witness are almost diametrically opposed, with Riven's environment being the mystery to solve, and the Witness' environment serving primarily as a backdrop to its hundreds of mechanical puzzles. There aren't any moments aside from the optional areas where you'll feel like the solutions are esoteric, or that you missed a detail in a dark shadow somewhere on the island, but this also means that the environment isn't the player or the game's real focus. The Witness does have some good moments of environmental interaction, but the very strong majority of solutions exist only on each puzzle panel. The exceptions are often superficial, walking around until an environmental features lines up with a panel and reveals the correct solution. To put it simply, the elimination of what the lead designer called "pixel hunts" from Myst flattened the experience, raising the lows the lowering the heights a player would experience.

By overlapping each of these game's individual successes and failures, you can begin to see the strengths and weaknesses of the genre as a whole. The core element is the environmental design, being the key to every player interaction when the gameplay is so strongly based on discovery. Being so rigorously first-person, even in cutscenes, emphasizes how the whole point of the experience is for players to take in their environment with no distraction. The secondary strength is the puzzling, which can come in a direct way, an environmental way, or a mixed approach. Of these three, The Witness feels the most direct, Riven the most environmental, and Myst being the mix. While all these approaches are equally valid from a game design standpoint, the goal for secondary mechanics is to compliment the core experience, in this case being exploring an environment. The tertiary focus of these games is direct storytelling, instead opting for most details to be picked up naturally through exploration. Myst and Riven each have simple plots, but the details you pick up along the way are what define the narrative more than the direct plot points. The Witness is even more sparse, really only pulling back the curtain only after you've beaten the game, and has hardly any audio or text to distract from the visual experience. With this hierarchy of goals established, the game with the most aligned goals and implementation would have to be Riven. This doesn't necessarily mean it's the best game of the three, but it's designed in a way that suggests an understanding of the genre, with the environment being the center of every gameplay and narrative element. Myst had tried to accomplish those goals, but with its puzzles and story laid on top of the environments rather than integrated within them, Riven had the advantage of learning and refining those goals. This leaves me with some disappointment in the direction chosen for The Witness that I hadn't felt when I had played it before. The Witness almost feels like a step backwards, with the puzzles and environment are almost entirely separate and no narrative link to encourage exploration or promote interest. This isn't to say that moving away from rigid genre definitions automatically makes a game terrible, and the opposite is more often true, but as mentioned before The Witness ended up moving away from the strengths along with the weaknesses. There are definitely elements from Myst and Riven to ditch, with some bad layouts, quirky puzzles, and obvious technical limitations, but it would have been nice to take the same aspirations a step forward rather than a step back. It's not just The Witness shying away from these ideas, so I don't want to be too mean to it specifically, it's just a shame that the great-grandchildren of Myst and grandchildren of Riven have forgotten why those games were so beloved even with so many issues. I hope more games like The Witness can boldly sell themselves in a media markets naturally set up to appeal to as many people as possible, while bringing the genre forward in a way that shows how captivating a fully realized world can be.